SAVE REBEL NEWS: Trudeau's lawyers are investigating me for writing a book about him!

Just before Christmas, Justin Trudeau’s lawyers made a shocking decision — a decision that must have been approved right from the top.

They decided to investigate me and Rebel News for publishing and promoting my book, “The Libranos: What the Media isn’t telling you about Justin Trudeau’s Corruption”.

I received the threat letter just hours ago — sent by registered mail, designed to hit me right between the eyes over the Christmas holidays.

I really can’t believe it. Here, you can read Trudeau’s full threat letter for yourself! 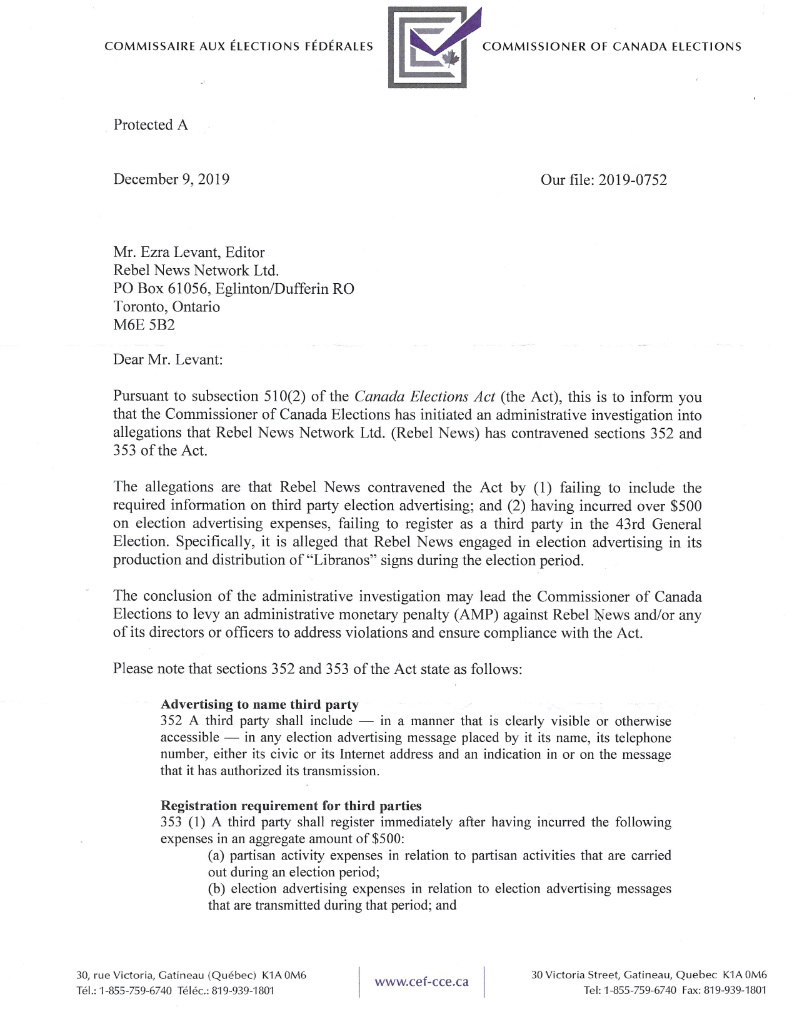 The election has been over for more than two months. So why now?

I think Trudeau is still angry that we beat his lawyers in court back in October — you’ll remember, Trudeau’s hand-picked debates commission banned our reporters from covering the debates. But after an emergency hearing, the Federal Court of Canada ordered Trudeau’s commission to let us in.

It was an amazing David versus Goliath victory — our two young lawyers beat five senior government lawyers sent by Trudeau.

This latest threat letter was obviously a kind of revenge — and it was timed to land right now, while Trudeau is on a private jet holiday in Costa Rica, far from any reporters who might ask him about prosecuting authors.

The letter was signed by Mylène Gigou, director of investigations for Elections Canada. Her letter suggests there is a whole team of investigators who have been assigned to my case. She’s threatening me with an investigation, prosecution and huge fines.

Read the letter above; Gigou offers me a kind of plea bargain. She says that if I cooperate with her, she’ll go easy on me — the fine will be lower than if I choose to fight for my freedom of speech and freedom of the press.

What do you think I should do?

I’m kidding — you know me better than that. I’ll never bow down to Trudeau, ever.

Trudeau obviously needs a reminder that just because 33% of Canadians voted for him — the lowest ever for a majority government in Canada — doesn’t mean he gets to take away our freedom of the press.

In fact, scrutiny of him is more important than ever.

So I’ve spoken to the two lawyers who beat Trudeau last time, and they’ve agreed to help us fight back. Obviously it’s going to cost a lot more than the $5,000 to apologize to Trudeau and settle with the prosecutors. When Alberta’s disgraced elections commissioner went after our reporter Sheila Gunn Reid for the exact same thing — publishing a book criticizing Rachel Notley —  they eventually dropped the charges, but not before it cost us $70,000-plus.

I think that’s what Trudeau is doing — trying to wear us down, both financially and psychologically.

Well, there’s no denying it will cost us money. But, as God is my witness, I swear to you that we will never stop speaking freely, and criticizing Trudeau and any other politicians we like. They will literally have to throw us in jail — and even then, you can better believe we won’t shut up.

We know how Trudeau thinks.

He believes that if he can shut me up —  and Rebel News, his biggest critic — then he can shut anybody up. He’s already got 99% of the Media Party in the palm of his hand. We’re one of the few hold-outs.

P.S. Fighting against the government feels like David versus Goliath. And it is. But we won last time — and we’re using the same excellent young lawyers. And Trudeau is clearly breaking the law — I mean, really: censoring a book? I really think we can win. Please click below to help chip in if you can.

P.P.S. If you prefer, please contribute by cheque. Please make it payable to “Rebel News” and mail it to PO Box 61056 Eglinton/Dufferin RO, Toronto, ON M6E 5B2.

Thank you very much!